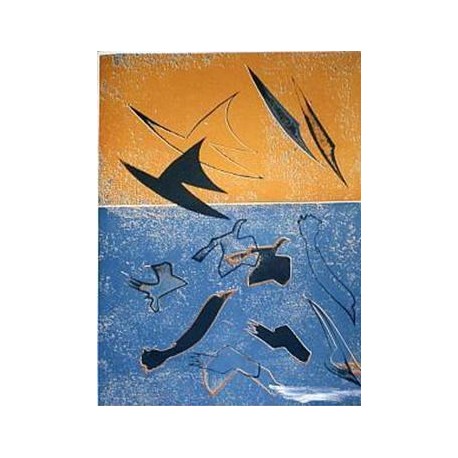 Painter, engraver as well as an expert on Spanish Art. Studied in Beziers and Barcelona (1932-1935). He initiated as painter in 1945 with pastel drawings clearly influenced by Toulouse-Lautrec and Van Gogh. His first abstract works in 1946 had influences of Mondrian and Kandinsky.

In 1948, he was part of the group of Dau al Set, at that time he immersed in the surrealism’s and magic abstraction, until he moved to informality. As engraver aportó el proceso de la maculatura y como literario published “Antoni Tapies o el Dau Modern de Versalles”(1950) Several articles in the magazine Dau al Set(1948-1956). In 1947 he met the painters Joan Ponç, August Puig and the poet Joan Brossa; later on he met Modest Cuixart and Antoni Tapies. All together they founded the group “Dau al Set” as well as the magazine with the same name where he wrote articles and was the edition’s director until the closed it in 1956. His firs own man show took place at the Galerias Jardin, Barcelona (1950) and at the Sala Gaspar: “Collages” 1954; “Maculatures” 1955; “Joies i Escultures” 1956; and 1957, 1958, 1º960, 1963, 1967, 1973.

His international projection was strong in Europe as well as in USA, exhibiting in one man shows and in collective’s exhibitions. His works are present in the Tate Gallery-London, Museum of Modern Art-New York, Salomon Guggenheim Museum-New York, Museo Nacional Centro de Arte Reina Sofia-Madrid, Museo de Arte Moderno-Barcelona as well as in several important Museums of Modern Art.

12 other products in the same category: