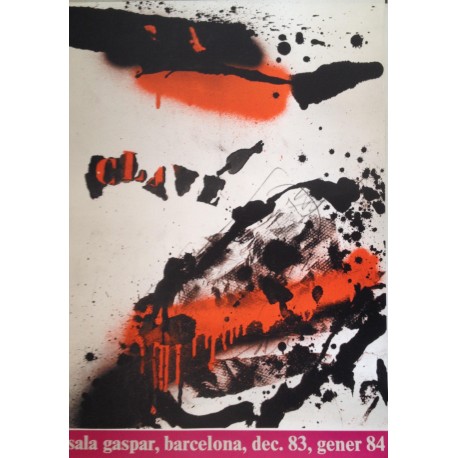 Attention! The colour that you see at you screen may vary from the original poster.

Tiny foxing spots may be present.

The historical poster for the exhibion of the work of Antoni Clave that took a place at Sala Gaspar (Barcelona)  December 1983 - January 1984.

Antoni Clavé is one of the most important artists in the Catalan Contemporary Art. He developed his artistic activity in almost every field: painting, engraving, lithography, collage, sculpture and photography. He studied in Barcelona and started his career as a designer for articles and cinematographic posters.

He participated in the Spanish Civil War with republican army and in 1939 he moved to France where he started to produce lithographs. This activity kept him in touch with publishing world. He illustrated many books, between them “Carmen” from Merimée (1946), "The Queen of Spades" from Pushkin (1946). In 1942 he met Picasso and decided to focus his work towards still life and urban landscape tending to the abstraction. At this moment he was an international artist. In 1954 Clavé decided to dedicate himself only to paint and started to include in his work strange iconography of medieval figures, bearded kings and dolls. The evolution to abstraction was unstoppable: the content was losing importance and the texture and visual aspects of atmosphere and background started to be essential.

In 1956 Clavé began to use the collage as a painting technique and the composition scheme incorporating themes typical of informalism. This year he presented his work in Barcelona, from that moment his exhibitions were regular. Besides painting he worked with sculpture, tapestry and set design for theatre, ballet and opera: “Carmen”, “The House of Bernarda Alba”, “The Marriage of Figaro”…

Antoni Clavé was a very close friend of the Gaspar family, and during the second part of XX century exhibited many times in Sala Gaspar as well as they collaborated in many Clavé’s exhibition around the world. Joan Gaspar junior, a dear friend from Clavé for more than 50 years, has presented several exhibitions in Galeria Joan Gaspar.

Would you like to buy this original poster? Don't hesitate to ask us any question by contacto@galeriajoangaspar.net. It's our pleasure to help you.

30 other products in the same category: