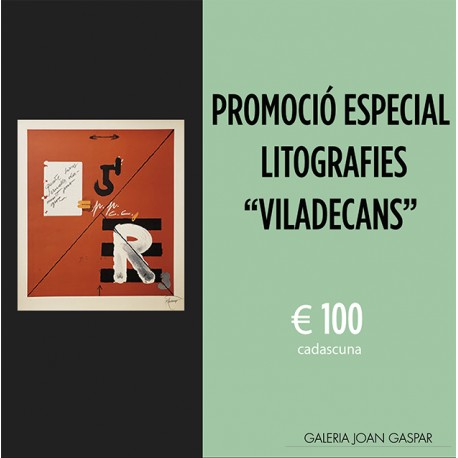 Special price of lithographs by Joan Pere Viladecans € 100 each

Selection of graphic works by Joan Pere Viladecans signed and numbered by the artist.

Edition: Editions of 125 signed and numbered.

At a young age Viladecans had to stop his studies and began to work. He was interested in poetry and plastic arts, which did eventually lead him to discover painting. He held his first individual exhibition at Sala Gaspar (Barcelona) in 1969. The success was so important that during next two decades he exhibit 6 times at this gallery.

Around the same time, his art became known in Germany through the Dreiseitel Gallery in Cologne, with exhibitions in 1971, 1974, 1976, 1980 and 1990. He had a close friendship with many representatives of Catalan culture as a poet Salvador Espriu and a multidisciplinary artist Joan Brossa. In the 1970s and 1980s his work was shown in galleries in Europe and USA.

His style changed in 1990, when he began to create pieces on paper with many different materials like India ink, oxides, resin, fish blood, sea water, iodine and squid ink. In 1994 and 1996 he held two exhibitions at Galeria Joan Gaspar. These were followed by two itinerant exhibitions: “A natural history (1998 – 2000)” exhibited in the Zoological Museum of Barcelona, Foundation “Obra Social La Caixa” in Manresa and the Chateau de Bellegarde, Le Perthus, France; and “365 days of Viladecans (1999 – 2000)”, which was shown at the Art Centre “Santa Mònica” in Barcelona and in the Cultural Centre “Conde Duque” in Madrid. In 2007 he exhibited at the Galeria Joan Gaspar in Barcelona and Madrid.

30 other products in the same category: