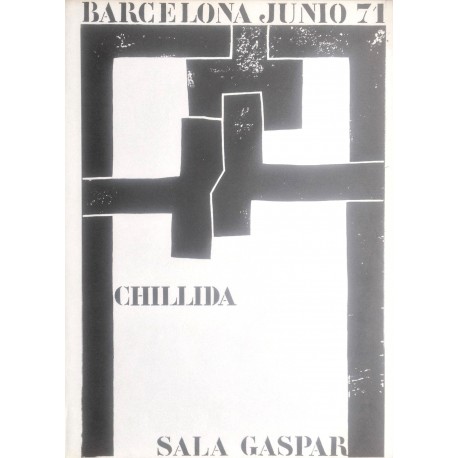 Attention! The colour that you see at you screen may vary from the original poster.

Tiny foxing spots may be present.

This product is no longer in stock

Eduardo Chillida is, without doubt, one of the most important Spanish artists and one of the sculptors who had a significant impact on the national art school. During his long and productive career Chillida worked and experimented with different materials creating recognizable forms.

In 1943 he started architecture’s studies that left three years later to draw at Madrid’sThe Fine Arts Circle. His first sculptures are made in this time. He lived some time in France, first in Paris and later in Villaines-sus-bois in the South. In 1951 he came back definitively to Euskadi. He worked the sculpture in all sizes and all the materials: wood, plaster, terra cotta, porcelain, alabaster, granite, concrete, steel, iron, bronze, etc.

Nevertheless, it would be unfair to demarcate Chillida’s art activity only with sculpture, because his graphic work occupies not less important place in his biography and always was in accordance with his sculptural work. The drawing was his first “praxis” but it was later, in 50’s, when he started to be interested in the engraving. Although his favourite media was an etching, Chillida also worked with xylography, lithography, dry point and screen printing, playing with only two colours: black and white.

Would you like to buy this original poster? Don't hesitate to ask us any question by contacto@galeriajoangaspar.net. It's our pleasure to help you.

10 other products in the same category: